The majestic Singapore orchid named in honour of Queen Elizabeth 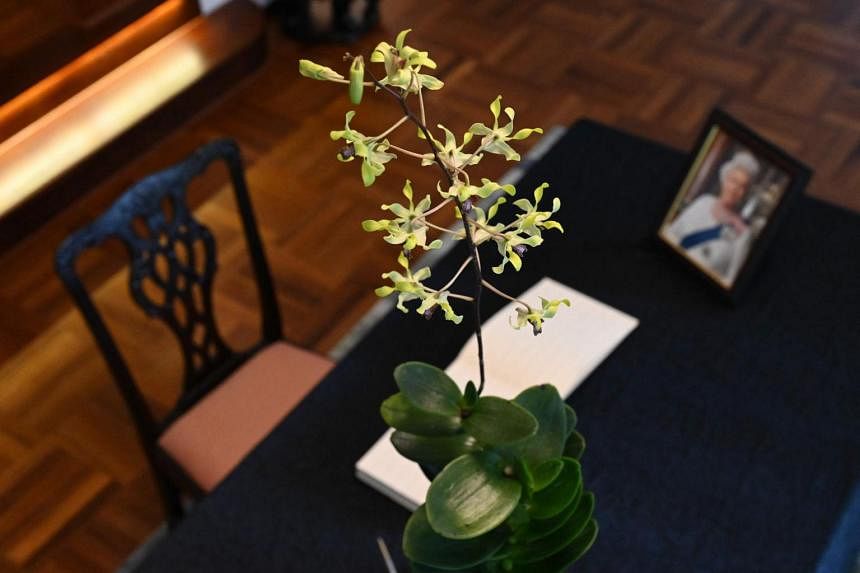 SINGAPORE – Elizabeth is majestic, hardy and “very fashionable”, said a top Singapore flower curator – referring not to the late monarch, but to an orchid named after the queen when she visited the former British colony.

After Queen Elizabeth II’s death last week, the city-state’s Botanic Gardens loaned a towering sprig of Dendrobium Elizabeth to the British high commissioner’s residence, to be displayed alongside pictures of the monarch.

The orchid hybrid, with twisted Dresden-yellow petals and a uranium-green lip, was named in honour of the queen when she visited Singapore in 1972, said Whang Lay Keng, curator at Singapore’s National Orchid Garden.

“Dendrobium Elizabeth is a majestic, robust and resilient plant,” she told AFP. “It’s kind of like how Queen Elizabeth carried herself.”

Flowering just twice a year, the Dendrobium Elizabeth was bred from orchids originating from Singapore and Papua New Guinea, and carries just about 40 blooms per plant.

Orchid-mad Singapore boasts the delicate, colourful blooms as their national flower, and the city-state often christens new hybrids after visiting dignitaries as part of its diplomatic charm offensive.

The tradition took root in 1957 during British colonial rule – which spanned more than 140 years – when an orchid variety was named after the wife of London’s high commissioner to Singapore at the time.

“During the 1970s, the colour yellow-green was very popular, so naturally we wanted to select something that was fashionable and very interesting,” Whang said, adding that “yellow is a colour of royalty”.

It is a “sun-loving plant that thrives in a moist and humid climate, where sunlight and warmth are important for its growth”, the orchid curator said.

Among the more than 200 orchid hybrids named after visiting leaders and celebrities – displayed in the VIP section of the city’s sprawling Botanic Gardens – there is also the Dendrobium Memoria Princess Diana. The pastel-white bloom was so dubbed after the death of the princess of Wales. AFP