A more divisive world could impact collaborations in science: Vivian 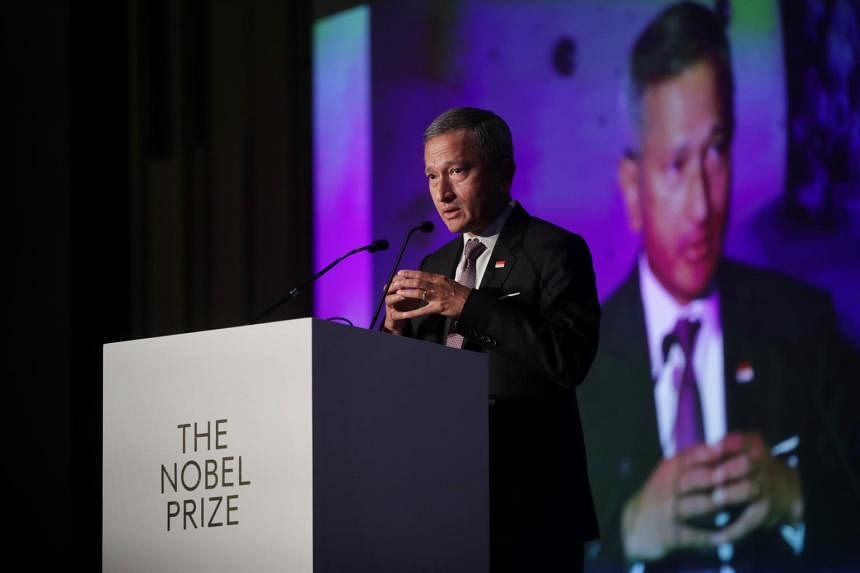 SINGAPORE – Beyond Covid-19, climate change is the most pressing long-term global challenge confronting humanity, but a more divisive world could get in the way of the global response.

Foreign Minister Vivian Balakrishnan said on Tuesday that a more divided world will have profound implications on the pace of scientific discovery, costs, interdependence and ultimately, security.

He was speaking at the Nobel Prize Dialogue 2022: The Future We Want Together where laureates, students and other experts came together to discuss how people’s lives can be improved and how a better future can be built.

Organised by the Nobel Prize Outreach and the National University of Singapore Yong Loo Lin School of Medicine (NUS Medicine), in partnership with the Asian Medical Students’ Association (AMSA) Singapore, the dialogue was held at the Raffles City Convention Centre.

In his speech, Dr Balakrishnan pointed out that geostrategic rivalry, such as the war in Ukraine, not only causes human calamities, but also has an impact on collaboration in the scientific field.

“Even for scientists, you’d know that sometimes even your passport matters and this is not healthy for science and (neither is it) good for diplomacy,” he added.

Global supply chains will also focus less on efficiency but more on “just in case” scenarios, which would also be more expensive for countries such as Singapore, contributing to inflation.

This poses a problem for the global economy, whether it is about future pandemics, or about the management of science and technology, said Dr Balakrishnan.

In tackling climate change, the Paris Agreement has the aim of keeping global warming to 1.5 deg C above pre-industrial levels to avert the more catastrophic impacts of a warming world.

While there have been research breakthroughs in renewable energy, such as geothermal energy and green hydrogen, whether the world will achieve this goal will depend on politics and economics, which will require collaboration across the globe, he said.

“Because human beings are always susceptible to the free-rider temptation, if everyone reduces (their emissions) and I don’t have to make the sacrifices, I’ll try to get away,” added Dr Balakrishnan, noting that this is not something humanity can afford both at the individual and international levels.

Urging students to take advantage of the Nobel Prize Dialogue to share ideas and learn from one another, he stressed that global collaboration could bring about a better future for the next generation.

He pointed out that Nobel laureates not only bring with them scientific and domain knowledge in their respective fields, but also “important values in a very broad world”.

Among the eight laureates who took part in the dialogue were Indian activist Kailash Satyarthi, who won the Nobel Peace Prize in 2014 for speaking up on child labour, and cosmologist George Fitzgerald Smoot III who spoke about Nasa’s Artemis mission to the moon and humanity’s desire to explore Mars. He won the Nobel Prize in Physics in 2006.